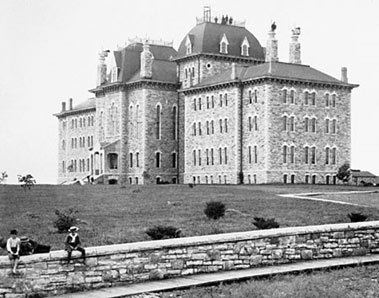 In 1882, The University of Kansas consisted of two buildings, and had somewhere in the neighborhood of 200 students. Each Spring, it might graduate one or two dozen. Given the cost of a college education at the time, only those of the highest ambition, and the social connections, were able to attend. This yielded a student body that was fiercely competitive socially and academically. This singular characteristic of the early student populous gave rise to a number of literary societies. These literary societies provided the forum for nearly all extracurricular activities.

Each society published a University annual, as well as some sort of journal during the school year. These societies also sponsored competitions among themselves in debate, oratory, and essays. Quite naturally, these societies also became hotbeds of student body politics.

It is in the extracurricular activity of the Oread Literary Society, that Nu Chapter of Sigma Nu has its genesis. All of the officers of the Oread Society were filled by the members of two fraternities. Despite a rivalry between these two fraternities, and the fact that they lacked a numerical majority within the organization, they prevailed over the unorganized majority of its members. 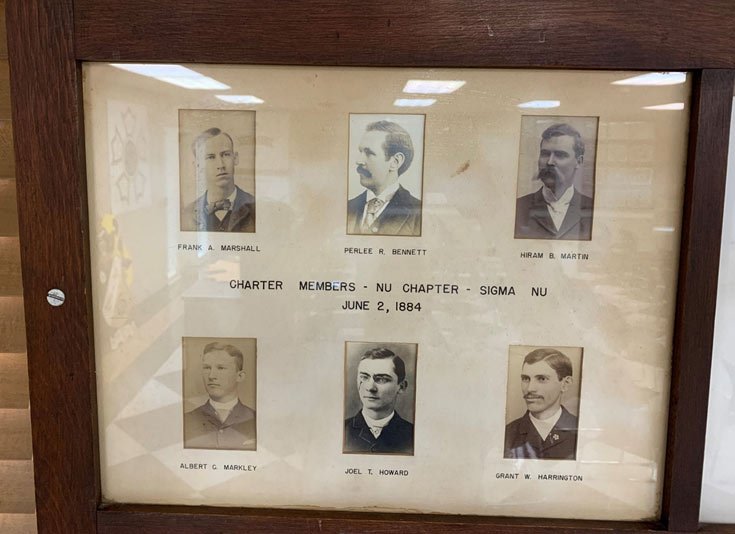 In disbelief of this superior political power wielded by the Greek organizations, a Sophomore university student by the name of Perlee Rawson Bennett became determined to counter this advantage through the creation of an organization. This group, kept secret, would plot to subvert the dominance of the secret cooperation of the two fraternities within the Oread Society. It was, in sort, and "secret anti-secret" society.

Bennett ultimately drafted five other students who were politically active on campus. Together, these six men executed Bennett's plan expertly. By the Spring term of 1884, Bennett was the President of the Oread Society. In addition, others in this group held positions of leadership in the rival Orophilian Literary Society, as well as some of the leading roles with the literary journals. In this same year, one of these six men, Albert C. Markley, was also elected as the President of the Class of 1887. The stranglehold on student politics had swung from the University's Greeks to Bennett's bunch. 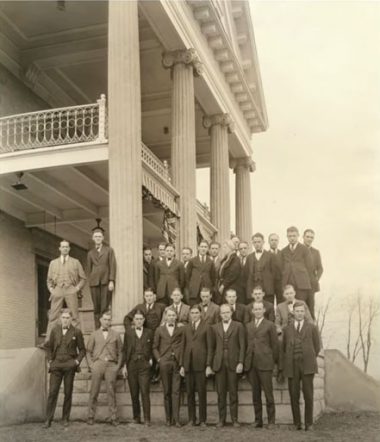 Midway through the 1883-1884 school year, however, the "secret anti-secret" society was exposed. A seventh member, added in January 1884, exposed the group to the rest of the University. When this student went on to seek a charter for another University fraternity, Bennett and his associates vowed revenge.

In June of 1884, the six men decided to cast their lots with the Sigma Nu National Fraternity. On June 21, 1884, Sigma Nu fraternity answered their petition and granted a charter for Nu Chapter at The University of Kansas! NU Chapter was the tenth collegiante for Sigma Nu, and was the first chapter west of the Mississippi.

Since then, Nu Chapter of Sigma Nu, has become one of the most respected fraternities on campus. It has a long history of success in intramural, academic, philanthropic and social activities. It has upheld the beliefs and traditions of Sigma Nu for well over a century at The University of Kansas.

From its humble beginnings in 1884, Nu Chapter has flourished and has now initiated over 2,500 young men. Making it one of the largest chapters in the nation. We are very proud of the fine men who have come from our ranks. Some of the more notable alumni of Nu Chapter include Pulitzer Award winning playwright William Inge, actor Paul Rudd, former Director of the FBI Clarence M. Kelly, NFL Hall of Fame inductee Mike McCormack, NASA astronaut and pilot of Apollo 17 Ronald Evans, and College Football Hall of Fame inductee John Hadl. Perlee Rawson Bennett, one of the founders of the Nu Chapter, shaped today’s ritual ceremonies of Sigma Nu. Also, the creed that binds all Sigma Nu members and alumni worldwide was written by Walter James Sears, Nu initiate #50. With its rich background and storied history, Nu Chapter of Sigma Nu continues to produce fine young men that are the future leaders of tomorrow.